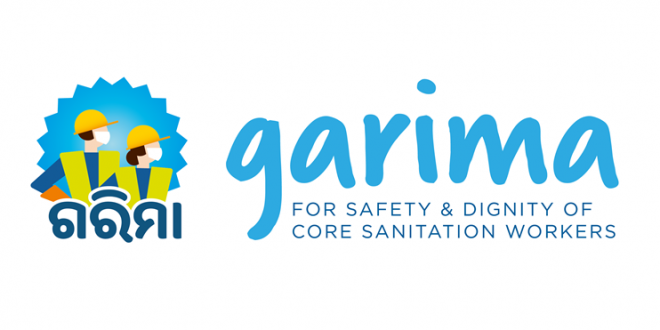 Sanitation workers have been at the bottom of the social and economic ladder who suffer from untold miseries and huge social stigma.

This scheme puts in place several initiatives to ensure a life of dignity and safety for all formal and informal sanitation workers engaged in core sanitation services in urban areas of Odisha.

Garima will be implemented by the Housing & Urban Development Department through 114 Urban Local Bodies (ULBs) of Odisha.

An initial corpus fund of Rs 50 crore will be made available to extend financial support for implementation of the scheme.

Announcing the scheme, the Chief Minister said,“Manual scavenging has been the starkest example of discrimination in the name of caste practiced in India, relegating the less privileged to perform the sanitation work handling human faecal matter.”

“In spite of the nation making several strides in various sectors competing with the best in the world, these underprivileged people were made to render this invaluable service to the society for generations, deprived of safety, dignity and a decent livelihood, apart from suffering social stigma and exclusion.

Our conscience can never be calmed if we don’t take steps to correct this generational injustice. My government has therefore decided to launch a scheme called Garima for safety and dignity of core sanitation workers,” said Patnaik.

Garima paves way for inclusive development of these core sanitation workers by ensuring essential working rights and benefits for them as well as their families. It is directed at promoting livelihoods, security and social dignity of sanitation workers through targeted measures.

As stipulated in the scheme, the working hours of sanitation workers will be limited to 6 hours per day, and they, along with their family members, will also be covered under Health Insurance Scheme and would get periodic health check-ups.

The corpus fund will also ensure ex-gratia payment to compensate the sanitation workers in case of partial and permanent disability due to accidents and injury. Additionally, Employees’ Provident Fund, retirement benefits and post service benefits such as “Family Pension” are also listed under the provision of the scheme.

Housing & Urban Development Minister Pratap Jena said the scheme is first of its kind by any state in India to provide a comprehensive package- institutionalizing and regulating the core sanitation services, providing service level benefits, social security and financial benefits to core sanitation workers and their families.

The scheme also brings an increased focus on enforcement of statutory provisions under various national and state legislations. Approximately, 20000 core sanitation workers and their families with about 1 Lakh population will be benefitted from the scheme, said Jena.

Department secretary G. Mathi Vathanan said, “Government of Odisha has always believed in inclusivity and the launch of this scheme reiterates the idea of inclusive governance and development. Creating frameworks and policies that protect sanitation workers is critical to India’s journey towards a sanitation ecosystem (which operates informally on caste basis) that is inclusive and sustainable.”

The Housing & Urban Development Department has signed an MOU with the Urban Management Centre, for providing the technical support to implement the scheme.

OPD services at AIIMS Bhubaneswar to start from Nov 2