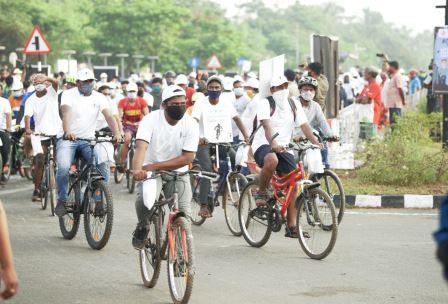 
Bhubaneswar: Around one thousand cycling enthusiasts from the smart city today thronged the Shishu Bhavan square to take on the ‘Cycles4Change’ challenge, a joint initiative of the Bhubaneswar Municipal Corporation (BMC) and the Bhubaneswar Smart City Limited (BSCL).

The event was organised to give respect to cyclist and promote cycling as a public transport means in the city.

As a part of the initiative, cyclists from different parts of the city today took part in the event – ‘Cyclegiri-Cycles4Change’ and pedalled from Sishubhavan square to Dhauli, a stretch of around 12 kms.

Bhubaneswar was one of the 95 cities in India to have registered for the India Cycles4Change Challenge, which is an initiative of Smart Cities Mission of the Union Housing and Urban Affairs Ministry to promote cycling.

BMC Commissioner Prem Chandra Choudhury who was present in the event said that the initiative was aimed to boost cycling habits among the denizens.

“Bhubaneswar has good scope for cycling on city roads. We already have a vast cycling track and a dedicated public bicycle sharing system. Because of COVID outbreak it went into a dormant phase. Now, we want to revive it and take it to the next level. We want to request the citizens to dedicate every Friday cycling voluntarily,” he said.

During the event, several citizens took the pledge to use cycles at least on every Friday. To pay respect to cyclists a Cyclegiri anthem was also launched.

The BMC and BSCL have requested the citizens of the smart city to use the environment-friendly means of transport in the city for a sustainable development of the state capital.

The urban bodies have now planned to make this event as a social movement and continue creating awareness through special campaigns till December 14.

Online and offline campaigns have also been planned to mobilise the communities to encourage them to do cycling.

The city Authorities have planned to carry out extensive awareness programmes for different groups such as bus, truck and taxi owners’ associations, driving training schools and driving license centres to ensure cyclists feel safe and respected while pedaling on roads.