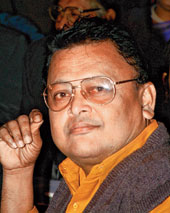 
Bhubaneswar: Eminent Odia film director and Jaydev Samman recipient Raju Mishra passed away at his residence in Jatani of Khordha district on Monday. He was 72.

He succumbed to a massive heart attack.

Mishra’s wife, Pratima Manjari informed he died after suffering a cardiac arrest after returning home from bank this afternoon.

Political leaders and film fraternity expressed their condolence on the death of Mishra.