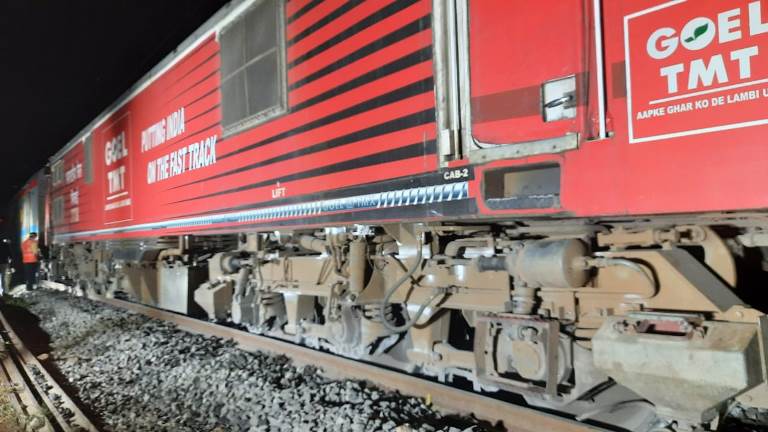 
Bhubaneswar: The Surat bound Puri-Surat Special train dashed with an elephant between Hatibari and Maneswar Railway Station in Angul-Sambalpur Railway Section under Sambalpur Division of East Coast Railway (ECoR) in the wee hours of morning.

All front wheels of the train engine got derailed, said ECoR.

The train departed Hatibari Station at 01.55hrs with a speed of 50 kmph as elephant caution had already been imposed by division.

On accident with the train, the elephant got entangled with the front portion of train engine, it said.

There was no casualty or injury to any passenger and all passengers were safe.

Swift and appropriate action had been taken by East Coast Railway on receipt of the information, said the ECoR.

Divisional Railway Manager of Sambalpur Division Pradip Kumar along with other senior officers reached the spot immediately and supervised the rerailment of the engine. They ensured quick returning of all the coaches of the train to Hatibari station and clearing of railway track.

Track fit was given at 07.10hrs with forest clearance and the Puri-Surat Special left Hatibari Station at 07.24hrs. Passengers were served with light refreshment at Sambalpur Station by East Coast Railway.

General Manager, East Coast Railway has ordered an inquiry at Senior Officers Level in this matter.

Train Loco-Pilots and Guards are being freshly counseled.