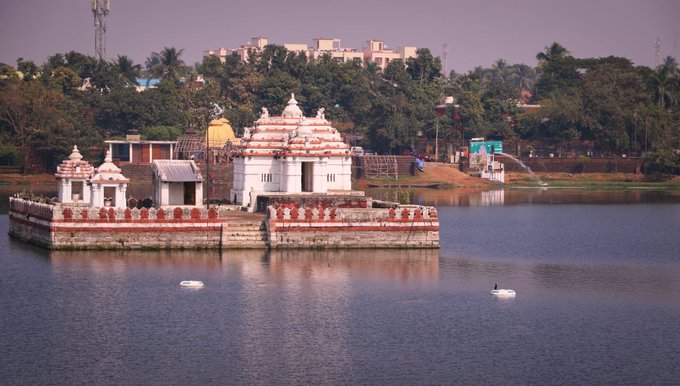 Bhubaneswar: The Bindusagar lake rejuvenation project was launched in Bhubaneswar on Saturday.

Institute of Chemical Technology (ICT), Indian Oil Corporation (IOC) along with the Odisha government will implement the state-of-the-art technology to clean up and revive the oldest and the largest water body of the Capital city of Bhubaneswar.

“Ekamra Kshetra Yojana is functional under 5T programme in Odisha. The Bindusagar lake cleaning initiative is a part of the project under the programme to keep the most sacred lake clean. I am thankful to the union minister and Institute of Chemical Technology for their support to the project,” Patnaik said in his address.

“Since the lake is connected with people’s cultural and traditional values and it symbolizes the national integration, collective effort should be made to maintain its sanctity,” he said.

It is pertinent to mention that Bindusagar lake cleaning project will be carried out at estimated cost of Rs 70 lakh under CSR programme of country’s commercial oil major Indian Oil.

‘The holy Bindusagar lake is believed to have originated in the 7th century AD. Surrounded by historic temples and architectural treasures, this lake near the Lingaraj Temple has immense mythological, religious as well cultural significance for the people of Odisha,” said the Petroleum Minister.

“ICT-IOC will also take up cleaning, restoration and conservation of other tanks and bodies adjacent to the Lingaraj Temple. This will be crucial in boosting the tourism potential of Odisha, creating large-scale employment and further propelling Odisha’s growth,” he added.

Pradhan said this initiative is one more step towards restoring the old glory of one of the most noteworthy sights in Bhubaneswar and also developing it as a tourism hotspot.