MCL Board approves sanction of Rs 9.32 cr for Hingula Temple in Talcher


Bhubaneswar: The Board of Mahanadi Coalfields Limited (MCL) has approved sanction of Rs 9.32 crore for the development of Hingula Temple in Talcher.

“I have been informed that MCL Board has approved sanction of Rs.9.32 Cr. under their CSR Fund for construction of certain facilities at Gopalprasad, Talcher, Angul, Odisha, for benefit of the local population in general and for providing impetus to tourism in the area in particular,” said Union Coal Minister Pralhad Joshi in a letter to Union Minister Dharmendra Pradhan.

Pradhan had earlier sought final assistance for the development of the shrine.

Maa Hingula temple at Gopalprasad in Talcher is considered one of the most sacred religious sites in Odisha. The temple is believed to have been built by the mythical King Nala of Vidharbha as his tribute to Lord Jagannath.

The fire used to cook Mahaprasad in the kitchens of the Jagannath temple at Puri symbolically represents Maa Hingula. 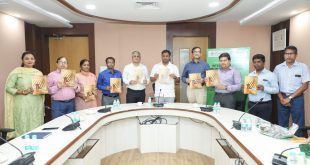