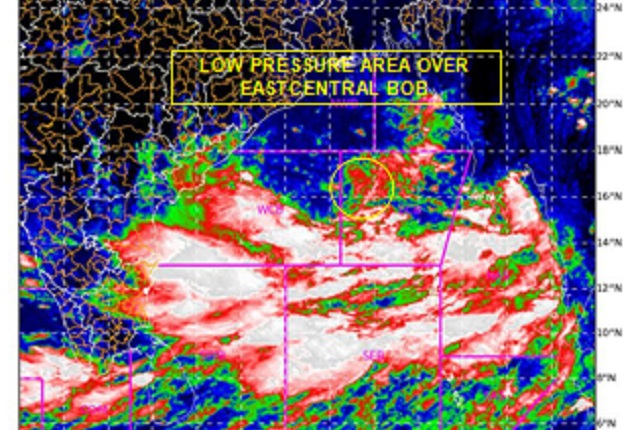 
Bhubaneswar: A low pressure area has formed over the east-central Bay of Bengal (BoB). It is likely to intensify into a depression, informed the India Meteorological Department (IMD) on Saturday.

“A Low-pressure area has formed over east-central BoB today morning and it will intensify into a Cyclonic Storm by 24th May and further intensify into very severe cyclonic Storm, move north-northwestwards and cross West Bengal and adjoining north Odisha & Bangladesh coasts around 26th evening,” tweeted IMD.

In the latest bulletin, the IMD said the cyclonic storm would continue to move north-northwestward and intensify further before reaching north BoB near West Bengal and adjoining north Odisha and Bangladesh coasts around May 26 morning, the bulletin reads.

It is very likely to cross West Bengal and adjoining north Odisha and Bangladesh coasts around May 26 evening.

Special Relief Commissioner Pradeep Jena informed that the fishermen, who were in deep sea, have returned to the shore.

He said advisories have been issued to the farmers for the cyclone.