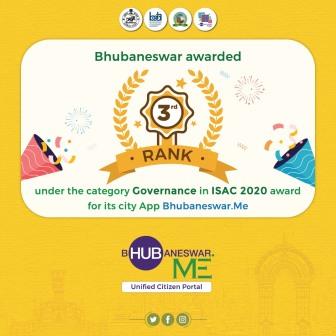 The awards, commonly called as IASC-2020, were declared this afternoon by MoHUA in New Delhi in which all 100 Smart Cities participated.

While Tirupati and Tumakuru got the first and third places in the Special Projects Category, under Governance Vododora and Thane were adjudged first and second respectively.

Expressing his happiness over BSCL’s achievement in the IASC-2020 Awards Smart City CEO Sanjay Kumar Singh said, “We have achieved these awards with our innovations and ideas and in future the city will come up with more such citizen-centric projects. The Smart City Project works will be expedited and I hope in future we will win more such awards during Smart City Challenge.”

“People centric programme for making Bhubaneswar a socially smart city” is a joint collaborative initiative of BSCL and UNFPA which takes the cognizance of the needs of the young people in the context of the prosperity, safety equity and sustenance.

It is a collaborative project of Bhubaneswar Municipal Corporation and BSCL with UNFPA, in which Humara Bachpan is the implementation partner. This aims to transform Bhubaneswar through improved infrastructure, technology, economic drive and quality of life for people and will contribute to achieving the SDG 11 (Sustainable cities and communities).

The project started from 1st Jan 2017 in 8 slums of BTCD area and now 100 slums and about 80 educational institutions are reached under the project. Young people are the main stakeholders of the project both at community level and institutional level.

The objectives of the Socially Smart Bhubaneswar project is to develop a youth-centric and youth-led integrated social intervention model to support citizens connect initiative.

It also aims to promote safety and security of girls and women in Bhubaneswar with specific focus on urban slums through community partnerships and to increase availability and accessibility of social, health and other development programmes for the vulnerable and marginalized population.

The Peer Leaders or “Pragati Sathis’’ trained under this project have also contributed towards the upliftment of health, sanitation and social issues including their services during the COVID-19 pandemic

Bhubaneswar.me is part of city’s governance and Bhubaneswar city administration wants to bring transparency through this initiative. This initiative also helped citizen to achieve common service requirement with this application.

At present it has a user base of more than 4 lakh citizens and more than 2 lakhs grievances has been resolved with this portal.  The portal has customised  dashboard for officers and citizens to track their requested services. This portal is also equipped with citizen document locker and an interactive chat bot for easy access of the application user.