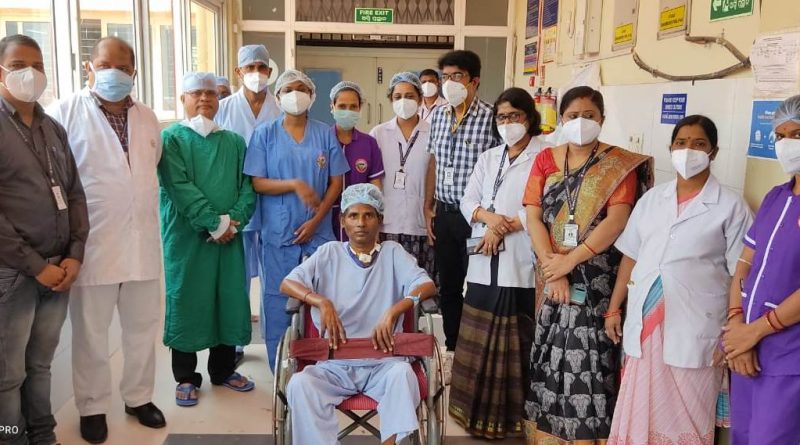 Bhubaneswar: Relentless effort by doctors and support staff at the Institute of Medical Sciences and SUM Hospital here led to the recovery of a Covid-19 patient who had slipped into neurological paralysis who was discharged after spending nearly four months in the hospital.

Arata Sethi (45) was admitted to the SUM Covid Hospital on May 11 at the peak of the second wave of the pandemic in a serious condition. After he tested negative, he was found to have developed nuerological paralysis and was shifted to the Neuro ICU of IMS and SUM Hospital under the care of Dr. Ishwar Behera and Prof. Chandan Das.

Dr. Behera is the Head of Neuro Critical Care department while Prof. Das is a medicine specialist.

The patient was diagnosed with post-Covid pulmonary fibrosis and quadriparesis (muscle weakness in all four limbs) and had to be put on ventilator as it was a very difficult case, Dr. Behera said.

“We had to do a tracheostomy on him to facilitate breathing but it was truly a hopeless case,” he said adding the patient began to turn the corner slowly.

Continuous monitoring and treatment helped Sethi to recover though he was still suffering from the effects of paralysis. He was discharged from the hospital after nearly four months though he would require care and physiotherapy at home, Dr. Behera said.

“We consider it a huge achievement for the hospital as the patient was in a precarious condition with badly damaged lungs. It is nothing short of a miracle,” Prof. Pusparaj Samantasinhar, Medical Superintendent of the hospital said.