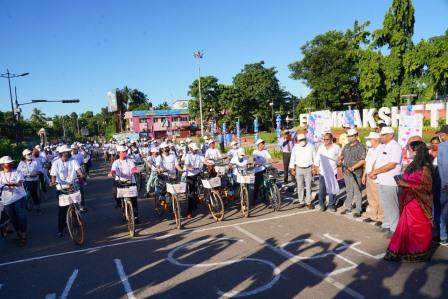 
Bhubaneswar: On the second day of the celebration of the Azadi Ka Amrit Mahotsav, Bhubaneswar Smart City Limited (BSCL) on Saturday organized an all-women cyclothon to promote a healthy lifestyle and creating awareness on breast cancer.

The cyclothon began from Sishu Bhawan Square and culminated there, after passing through Janpath, Exhibition Ground Road, Sachivalaya Marg and Udyan Marg. The participants were from Rama Devi Women’s University and Kamala Nehru Women’s College.

Adyasha Nayak, a student of Kamala Nehru Women’s College, who participated in the cyclothon, said, “I am very happy to participate in the event in which we all participants used the Mo Cycle and enjoyed the ride. With the city providing a beautiful atmosphere to the cyclists, we all enjoyed the event.”

Muzda Taliha of Rama Devi Women’s University said, “The event was well-organized to provide a unique platform and the awareness on a prominent health issue of women. We also got an opportunity to check the cycling infrastructure of the city and found that it is very much citizen-friendly.”

As part of the citizen-centric planning of the Smart City Proposal, Bhubaneswar has developed a good city-wide facility for cycles and pedestrian ways so that the emissions are less and citizens enjoy a healthy environment to breathe in fresh air with less pollutants and particulate matters in the neighborhood air. The city has relied on its non-motorized transport (NMT) planning to make it more livable.

In July this year the Temple City bagged India Cycles4Change Challenge Stage-1 Award as it was adjudged among the top 11 Cycling Pioneers of the nation. All the 11 cities will receive an award of Rs 1 crore each to scale up their cycling events in their respective cities.

Managing Director and CEO of Bhubaneswar Smart City Limited Sanjay Kumar Singh said “We are committed to providing better and healthy living conditions and facilities for citizens so that the clean and green tag of Bhubaneswar would be seen translated to reality in every zone and subzones to make it a wonderful place to live in.’’

This year Smart City, Bhubaneswar had ranked fourth among the top 10 Livable Capital Cities in India. Interestingly, the Temple City had topped in the Citizen Perception Survey with the highest score of 94.8 out of 100 as per the New Delhi-based Centre for Science and Environment (CSE’s) Ease of Living Index Report, 2020.

A blood donation camp was also organized on the occasion by different volunteers at Kamala Nehru Women’s College. Several corporate and business houses were partners in this program.

Tomorrow the Bhubaneswar Smart City Limited will organize a special heritage walk in the Old Town area at 7.05 am starting from Mukteswar Temple, which is known for its unique arch and beautiful carvings on the temple wall projecting the Kalingan temple architecture.