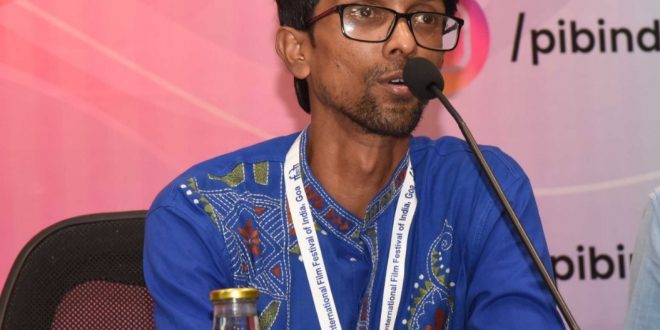 
The simple quest of a simple and self-effacing ice-cream seller to discover life and its meanings. Film lovers at the ongoing International Film Festival of India in Goa got a simple yet beautiful chance to lose themselves in the pristine simplicity of the common man, thanks to Nitantoi Sahaj Saral. Set in rural Bengal, the Bengali film by Director Satrabit Paul is about simple people and their simple lives. In keeping with its name (meaning “very easy and simple”), the story and the characters too portray simplicity at its finest.

The Director revealed the wellsprings of inspiration which led to the provenance of the movie. “I have been witnessing the characters of the story ever since my childhood. The role of the protagonist is based on a real life ice-cream seller from my school who used to come in his cycle and sell ice-cream to little kids. I got the inspiration of my main character from him.” Paul said this, while addressing a press conference, on the sidelines of the 52nd edition of the festival, in Goa today, November 23, 2021. The film has been screened at IFFI under the Feature Film Category of Indian Panorama Section.

Describing the film as a black comedy, Paul said: “The film revolves around an ice-cream seller from Haldibari, a border town in West Bengal. He happily travels through the remote areas of rural Bengal for work. While travelling to remote villages for his work, he experiences both good and bad things during his journey, which teach him the meaning of love and life.”

In the film, the ice-cream seller goes to a mela, which symbolizes life itself. Like in life, the ice-cream seller encounters different kinds of people on the way. While some try to help him reach his destination, others mislead him. “My protagonist goes from city to villages for work because he doesn’t like the hustle-bustle of city life, sometimes he doesn’t want to sell ice-creams and for that, he gets scolded by his manager, but he is not bothered. One day, he meets a man who tells him about a mela, a meeting place.”

Shot in black & white, the film is a satire portrayed through the eyes of the storyteller. The events take place when he embarks on the journey to the mela. He loses his cycle, his only source of livelihood on the way, but he gets its back again. In the end, the ice-cream seller couldn’t reach his destination but he met a man who was returning from the mela. The man said his hunger got satiated but his heart’s desire remained unfulfilled. Paul said in life too, we have many dreams and wishes but most of them remain unfulfilled.

The Director told film delegates how the story progresses with the beats of the bell of the cycle. “The film doesn’t have any background music, the only music is the sound of the cycle of the ice-cream seller.”

Paul started his career with acting in a television serial and has hence been associated with theatre for many years. “I never thought my first film as a director will get selected for such a big platform. Though I used to act in theatre, I always wanted to make a movie. I became a writer by chance and wrote the story of this film in 2015.” He said that he is inspired by Satyajit Ray and Buddhadeb Dasgupta, the cinematic legends of Kolkata.