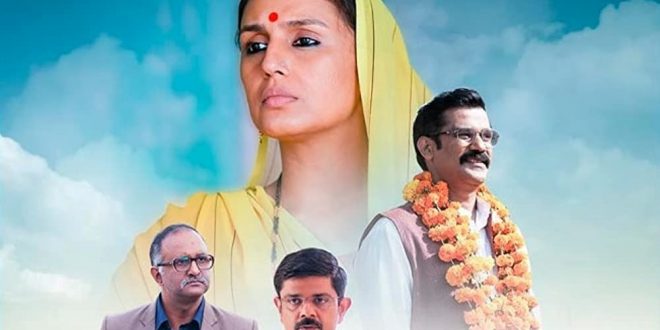 
Maharani has been made with the goal of bringing to viewers an up-and-close view of the world of politics. This is how Nandan Singh and Uma Shankar Singh, writer-duo of the popular web series and political drama set in Bihar, had to tell IFFI 52 delegates today, November 24, 2021. “We are used to seeing cliched portrayals of politicians. We wanted to change that, we wanted to show the world of politics from the inside. We never get to see the side-stories of politicians.”

The two writers were addressing an online / virtual Masterclass, held on the sidelines of the 52nd edition of the International Film Festival of India, being held in Goa in a hybrid format, during November 20 – 28, 2021.

So, what to expect from the Season 2 of the highly popular show? “The second season of the show will involve hardcore politics. No longer naïve, people would expect difficult choices from the protagonist Rani Bharati, as she traverses the minefield of politics.”

How accurately does the series reflect political and social realities of Bihar, where the story is set? Uma Shankar Singh answers: “We lifted facets of our story from reality and added our inputs to it. We have tried to portray things which make us human, such as conspiracies, fears of politicians.”

Speaking about the thorough need for research and how the research inputs were incorporated into the story, Nandan Singh says: “Both of us hail from Bihar. Hence we knew many things about the state and its politics beforehand. However, during our research for the series, we realized how little we know. While weaving it into the story, we tried to thread in our research seamlessly into the story.”

Nandan Singh went on to add that Maharani is a politically sensitive drama and they tried not hurt anyone’s sentiments.

The writer duo were all praise for the creator Subhash Kapoor for his understanding of the subject. “Given his grasp of the matter, it was difficult to believe Subhash Ji is not from Bihar. He is very good with relatable stories and writing dialogues that resonate with the audience.” Uma Shankar Singh added that when someone is with Kapoor, one feels like sitting in the library.

Speaking further about his filmmaking approach, Nandan Singh recalled that Kapoor avoids jargon and being preachy in his film. Actors too fare better when he is at the helm, he says.

Nandan Singh narrated how they had little time for brainstorming and discussion sessions due to the COVID-19 lockdown how they worked and brought out a good script despite the same. “OTT platforms need very strong writing. However, most of the discussions for the writing of Maharani took place through Zoom meetings or over the phone.”

Uma Shankar Singh went on to narrate how he took extra efforts to bring out the wit and humour widely prevalent in the daily life. “You brought to the screen the language that we speak at home”, so told me one viewer who watched the series, said a beaming Uma Shankar Singh.

How is writing for OTT platforms different from that for films? Nandan Singh says writing for OTT is like writing a novel. “While writing for films, we have to worry about many angles which can have economic ramifications, but writing for OTT is like writing a novel, you can do justice to the sub-plots and other characters as well. OTT is subject to less commercial pressures from other players in the ecosystem, it thus gives a liberating feel”. On the other hand, Uma Shankar Singh believes that “to write for OTT, one has to write a lot, you cannot neglect any sub-plot or aspect. You have to give equal attention to all characters. We can reach our viewers without the intermediary layers of exhibitors and distributors.”

For Uma Shankar Singh, the character of Rani Bharati is most nuanced, she coming from a small village and being new to politics. Nandan Singh on the other hand finds the character of Bheema more complex due to the negative side lying hidden in the role.

Both the writers agreed that OTT has given chance to a wide spectrum of people working in the entertainment industry and work on many stories was made possible only because of OTT. Uma Shankar Singh even added that it is a golden period for writers and never have they ever seen so good opportunities.

However Uma Shankar Singh noted that even OTT platform requires us to add twists and turns every now and then, which can be difficult for storytellers. Nandan Singh however looks at it as an opportunity to attract and maintain audience.

Both the directors mentioned the problems like writers’ bloc and exhorted the listeners to try and overcome the same, rather than glorifying it.