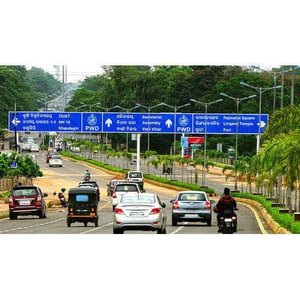 Roads in Odisha to be 100% road signage compliant


Cuttack: While road crashes are overwhelmingly caused by human error, the untapped potential to prevent road accidents and fatalities lies with dealing with the road infrastructure itself. With an aim to make roads in Odisha, 100% road signage compliant, Transport department is starting a unique initiative of road signage audit in the State.

Roads should speak and have better communication with the users. With this objective the Transport Department is making concerted efforts to identify faulty road signage and markings and rectify the faulty ones. In this regard, a small sample audit of road signage and marking on SH-10 (Biju Expressway) from Deokaranpur to Keseibahal, 50 km stretch in Sundargarh district was conducted with the help of experts.

The study revealed that there is a need for more signs to warn, inform, guide, control or delineate the road users. At some places the pavement markings are not conspicuous and continuous. The study further suggested that lack of signage may cause confusion at intersections and inadequate signage can cause accident. The Indian Road Congress code has set several parameters for three types of road signs—regulatory, warning and informative. The parameters include characteristics, installation, location and visibility for correct application.

As per the findings and recommendations of the sample audit, rectifications are being carried out on the stretch of the highway. As part of the drive, concerned officials will put up proper road signages in place of the faulty ones and repair the damaged ones. They will also install new road signages wherever required.

Based on the findings of the pilot project, Transport Department has decided to scale up the initiative at state level. It has been decided to conduct audit of road markings and signage for 3000 kms of roads across the state.