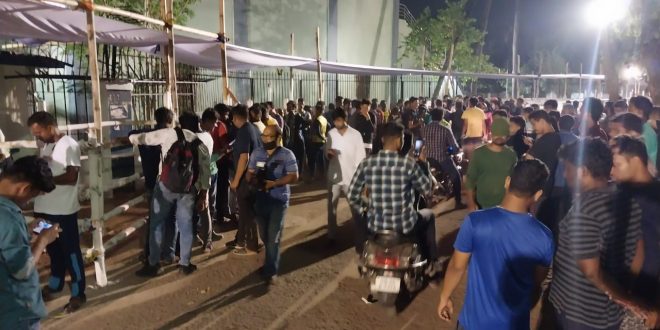 
With the Odisha Cricket Association (OCA) is all set to sell the offline tickets for the upcoming India Vs South Africa T20 international match at Barabati, cricket lovers are seen standing in long queues to buy tickets.

The counters will be opened from 9 am, but the cricket lovers have been standing in the queues since last night.

According to the information, there will be nine counters for the sale of the offline tickets. These counters include two dedciated counters for women. The OCA has urged the cricket lovers to maintain peace while buying tickets.

The OCA has allowed each person to purchase a maximum of two tickets of any denomination by providing a valid Government ID proof (Voter ID, Aadhar Card). A total of nine counters will be used for ticket selling.

Team India Captain KL Rahul has been ruled out of the T20I series against South Africa owing to a right groin injury while Kuldeep Yadav will miss out in the T20I series after getting hit on his right hand while batting in the nets last evening.

The All-India Senior Selection Committee has named wicket-keeper Rishabh Pant as Captain and Hardik Pandya as vice-captain for the home series against South Africa.

The selection committee has not named a replacement for KL Rahul and Kuldeep Yadav. Both the cricketers will now report to the NCA where the medical team will assess them further and decide on the future course of treatment.