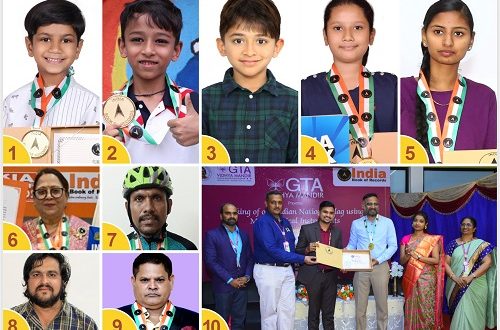 
There are many people who look forward to be associated with the India Book of Records and are inspired after going through our annual book that we bring out year after year. Our organization is enthused by such achievers and record holders who inspire us to grow as a team. We are proud to guide them towards record making activities. The following events and records that made a special mark this time appear as under.

Rapid Addition of Maximum Single Digit Numbers Performed Underwater by a Child
The record for performing the rapid addition of the maximum number of single digit numbers underwater was set by AdvitPrateek Agarwal (born on May 4, 2014) of Surat, Gujarat. He added 85 single digit numbers (flashing on the screen) at a speed of 0.5 seconds while being underwater, at Turtle Puddle, Piplod, Vesu, Surat, Gujarat, at the age of 7 years, 11 months and 20 days on April 24, 2022.

The record for being in the mermaid pose for the longest duration was set by Priyadharshini S. (born on February 1, 2002) of Tiruvallur, Tamil Nadu. She maintained the mermaid pose (EkapadaRajakapotasana) for 1 hour 15 minutes at the age of 20 years 1 months 7 days, on March 8, 2022.

The record for undertaking the fastest North to South solo unsupported cycling expedition was set by Srinivasan B (born December 28, 1975) from Chennai, Tamil Nadu. Being unsupported, he travelled solo and covered a distance of 3,677 km in 14 days, starting from Kashmir on February 12, 2022 and ending at Kanyakumari on February 26, 2022 to promote ‘Commute on Bicycle for Reducing Pollution’.

Largest Blue Whale Made with Scraps

The record for making an innovative advanced electro hydro-pneumatic brake failure detection system was set by Sunil Pandurang Chaphalkar (born on March 6, 1965) of Pune, Maharashtra. The system is also known as electro-mechanical braking system (Patent file no. 202221002345 A and Journal Number 08/2022). The main aim of this invention is to identify the failure of the braking system and apply brakes automatically to the vehicle. The patent was published on February 25, 2022 in the patent official journal, as confirmed on March 25, 2022.