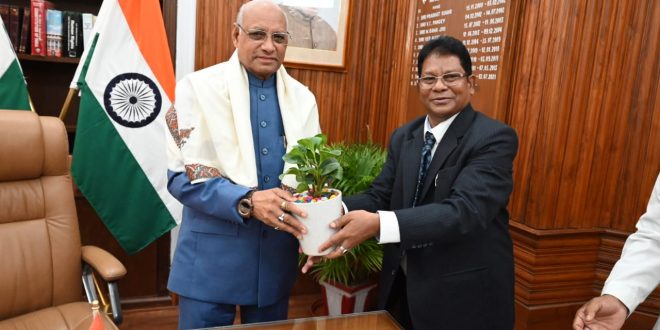 He is the 2nd regular Vice-Chancellor of the University.

Ramesh Bais, Governor of Jharkhand, in the capacity as the Chancellor has appointed Prof. Bhoi as the Vice-Chancellor of the BBMKU for a terms of three years from the date of his joining until he attains the age of seventy years, whichever is earlier.  He took over the charges from Prof (Dr.) Mukul Narayan Deo who acted as a Vice-Chancellor In charge on 22 June 2022. As it brings pride to Odisha many people from Odisha congratulate him and convey their best wishes to Prof. Bhoi.

Prof. Bhoi has a very vast and impressive academic as well as administrative experience. Prior to joining the VC of BBMKU he was the senior faculty of the Shri Lal Bahadur Sashtri National Sanskrit University (Central University), New Delhi (from 2007); Banaras Hindu University, Varanasi (1998-2007 and Assam Central University, Silchar (1996-98).

Prof. Bhoi did his MA, M.Phil. & PhD in Sankrit from Utkal University and did his BA from prestigious Ravenshaw College, Cuttack. He has over twenty six years of teaching experience and has published over 100 research papers in National and International Journals. He has also supervised 15 Ph.D. scholars and evaluated more than 150 Ph.D. research thesis.

Prof. Bhoi served as the members, UGC observer and nominee and subject experts for many of academic bodies of higher educational Institutions of the country.

Prof. Bhoi’s works in the areas of Sahitya and Linguistics. He has lectured at a number of leading Colleges and Universities in India as resource person and guest of honour including Banki Autonomous College, Banki; Ravenshaw University, Cuttack and Utkal University, Bhubneshwr  of Odisha, He  is from Kalantira (Pokhariapada) under Sompur post Office of Jagatsinghpur (Undevided Cuttack district).