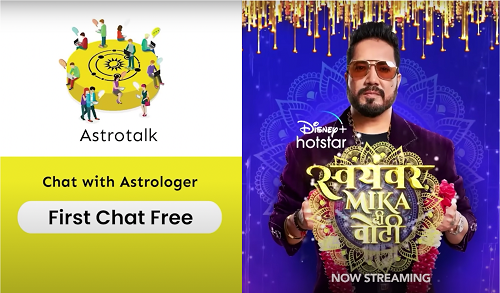 Astrotalk Comes on board as co-presenting sponsor for Swayamwar: Mika di Vohti on Disney+ Hotstar


It’s no secret that Bollywood singer Mika Singh is looking for a bride, and Swayamwar is the way to go for him. Singh is set on a tough yet beautiful journey of bride hunting through an extravagant reality show titled Swayamvar: Mika Di Vohti, Co-presented by Astrotalk. The reality show streaming on Disney+ Hotstar is set in Jodhpur and will see 12 women competing against each other to be the queen of Mika’s life.

The show is a grand affair, with the episodes being shot in Bollywood’s favourite marriage destination – Rajasthan. Along with Mika, the show will also feature popular Bollywood personalities – Daler Mehndi, Kapil Sharma and Shaan who is the host.

Taking the entertainment quotient, a notch higher, Krishna Abhishek also made the audience laugh their guts out with his hilarious stints in the debut episode of the show on June 19. All we can say is that, this is going to be one of the biggest reality shows on Indian Television Channel.

Interestingly, the debut episode of Mika Di Vohti which aired on 19th June 2022, has not only managed to keep the audience intrigued but also inspired a firm and its CEO to actually co-sponsor the show.

Puneet Gupta, Founder of Astrotalk, when first heard about the show and Mika’s hunt for a compatible partner, he couldn’t stop but relate Mika’s story to the sole purpose of Astrotalk, which is to let people connect with genuine astrologers to help them find the right life partner.

“At Astrotalk, we have served over 3-crore customers till date, and most of our customers ask astrologers questions such as – When will I get married? Will I have a love marriage or arranged marriage? What will be the future of my marriage? Or is me and my partner compatible? etc.,” says Puneet.

Puneet further adds that when he saw Mika in an interview mulling around the same questions, he realised that finding a compatible partner is not only the most difficult thing in a relationship but a common concern across classes.

“I see Mika Di Votti as an opportunity to let everyone know that finding a compatible partner is not as hard as we think. Yes, there are times when we can’t figure out who is right for us but astrologers can help you know everything about your future partner,” says Puneet, adding that he was told by an astrologer that he would marry a girl with huge age difference and that prediction has come out true for him.

“It is a proud moment for us to reach a stage where we are able to co-present such a huge show, despite bootstrapping Astrotalk. I am very excited for the episode when one of our astrologers will predict the marriage of Mika Singh during the show,” Puneet adds in excitement.