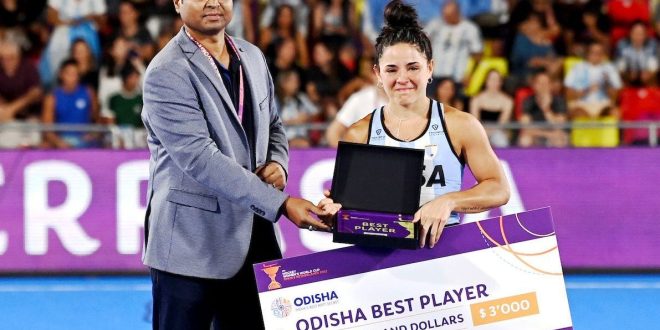 
It was a  moment of great pride for Odisha as Indian Former Hockey Captain and Chairman, Odisha Hockey Promotion Council,  Dilip Tirkey presented the Odisha Player of the Tournament to Maria Grannato of Argentina  at the closing of the FIH Women’s Hockey World Cup 2022 at Terrassa, Spain, while the crowd cheered with aplomb for the young winner and the legendary hockey player.

It was a delight for  hockey fans in the stand and former hockey players at the event to see the legendary Dilip Tirkey former Indian Hockey Captain and by far the best defender amongst them  at the spectacular finals of the 2022 FIH Hockey Women’s World Cup.

Overwhelmed with the warmth of hockey fans he shared, “It is always a delight to be here in Teressa, which is known to be the home of modern hockey. I am honored to have had the opportunity to represent Odisha and present this award. As a player, it is a special moment to get recognized as the best in the world, and handing out the award to Maria Grannato was a very emotional moment that brought back many memories of my playing days”

” I am deeply touched by the warmth of the hockey lovers in Spain. It is indeed an endearing moment in my life. Like Spain, Odisha is committed to development of hockey amongst its young players.”

Legendary star striker of Pakistan, Shahbaz Khan who was also present at the World Cup reminisced the glorious past of hockey shared between the nations.

It is noteworthy to mention that Odisha not only supports and sponsors the Indian National Hockey Teams but is also an official partner of FIH for popularising the sports globally and the same is being commended by the hockey fraternity beyond India.

Come January 2023, it will be hosting the FIH Hockey Men’s World Cup in Bhubaneswar and Rourkela.
Fans and players expressed their great love for Odisha and its contribution to the world of Hockey.