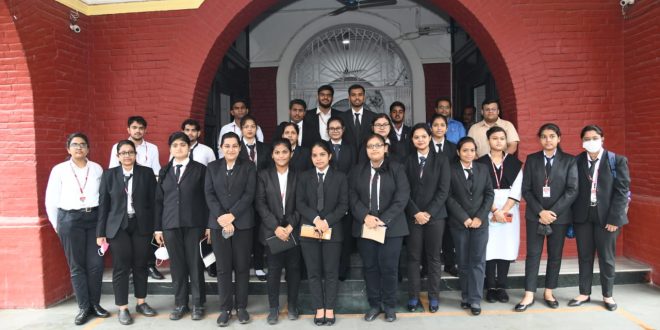 
The High Court of Orissa has, on 23rd July, 2022, organized a visit of twenty five Law students of 2nd Semester L.L.B from M. S. Law University, Cuttack to its premises. On the Children’s Day, 2021, the premises of High Court were, for the first time, opened for children.

On 23rd July students of 2nd Semester L.L.B from M. S. Law University, Cuttack and their teachers visited the High Court premises at Cuttack. Lawyers Sagarika Sahoo and Jagadish Biswal were present on the occasion. They explained various aspects of judicial functioning to the students. The students saw the Chief Justice’s Courts and Chambers in the Heritage Building and the New Building of the High Court, Judges’ Library and the Conference Halls. They put queries which were answered by the lawyers.

The students were shown video clips of swearing-in-ceremony of Judges and explained the procedure involved therein. Video clip of the hearing of one Public Interest Litigation was also played for viewing of the students in the Chief Justice’s court room.

The students also visited Aain Seva Bhawan which houses the Odisha State Legal Services Authority and the High Court’s Arbitration and Mediation Centers where they were sensitized about the Alternative Dispute Redressal (ADR) mechanism and its contribution in redressal of the grievances of poor litigants.

At Odisha Judicial Academy the students were given idea about various kinds of training programmes designed for the lawyers and Judges. They also interacted with Justice R. K. Pattanaik who shared with them his experience as lawyer and explained how Civil and Criminal Courts function in effective administration of Justice.

Discussion over hierarchy of Courts in Sub-ordinate Judiciary, its jurisdiction and functioning clarified some of the basis doubt of the students. Justice Pattanaik during discussion stated that independent judiciary contributes a lot to the growth of society.

Though there had been visits of students from Schools including differently abled children to High Court in the past, this is the occasion when students from the oldest Law College of the State visited the High Court of Orissa. The purpose of organizing such visits is to bring transparency about the real functioning of judiciary which is different from the myths prevailing in the society.