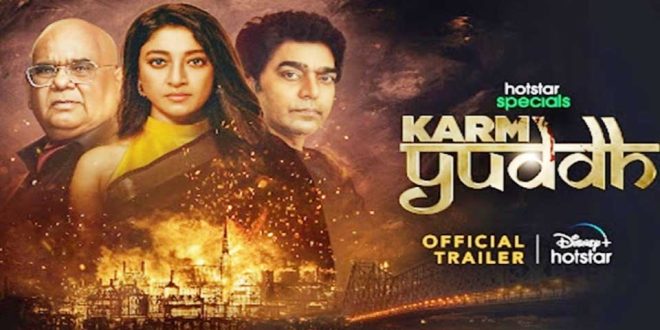 
Karm Yuddh, which is streaming on Disney+Hotstar, has emerged as the most watched show across platforms for the week ending 2nd October, 2022, according to an Ormax Media report.

Karm Yuddh is directed by Ravi Adhikari and produced by Kailashnath Adhikari under the banner of Adhikari Brothers Enterprise.

Karm Yuddh is a story about power battles within a rich Bengali family, The Roys. How blood turns against blood in the quest for power that emotions have no place in a relationship.

The show begins by building up the story as a family revenge drama, where Vardhaan Roy’s (Rajesh Khattar) second wife, Indrani Roy (Paoli Dam), is leaving no stone unturned to become the chairman of the Roy Group of Industries, which was allotted to her husband, who is suffering from a paralysed body after a huge accident. On the other hand, the big brother, Bhisham Roy (SatishKaushik), is using his power to get to that chair by hook or crook.

The show was trending among top 10 shows all over social media. The netizens were enchanted by the show. Words of praise were floating all across media, social media and films and media personalities.

Talking about the accolades that the show has received, Director Ravi Adhikari shared, “It is an unexplainable feeling when your vision not just takes shape in form of a show but also relates with the audience and connects with them. It was a giant leap for me to venture into a new genre with this show and its success gives me more confidence for my future endeavours.”

Producer of the series Kailash Adhikari said, “Karm Yuddh is a huge canvas show with an ensemble cast, thus, working on this project has been a completely different experience. We have shot over 90 locations which was a mammoth task in itself. The entire production team and all departments were literally on their feet 24/7 to bring this mega canvas in front of the audience.”