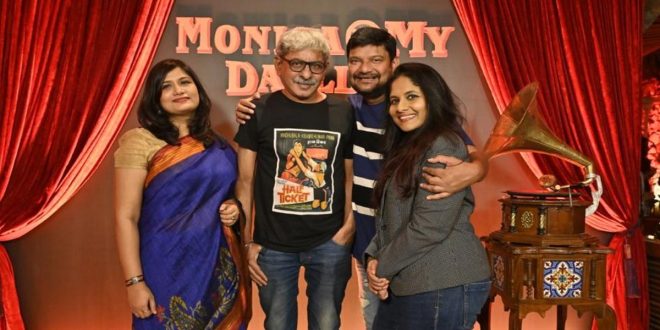 
Matchbox Shots got tremendous responses for their film Monica O My Darling directed by Vasan Bala which was released recently.

Matchbox Shots’ upcoming film is Scoop, the dramatic adaptation of a real-life journalistic incident by Hansal Mehta. Mehta made a huge impact on Indian OTT with Scam 1992. Matchbox Shots is also working with the most respected directing and writing talent for their upcoming projects. Sanjay Routray said, “We are overwhelmed by the love Monica O My Darling received after Andhadhun. Regardless of the genre, we pull out all stops to support the project. While Matchbox Shots is proud to be working with Hansal Mehta, Anubhav Sinha, Navdeep Singh and Vasan Bala, filmmakers who have made their mark, we are also excited about our new voices like Avinash Arun, Varun Grover, Pankaj Kumar, Smita Singh and Abhijeet Singh Parmar.”

Currently, Matchbox Shots is producing six series with leading OTT platforms including one international. Sarita Patil says, “Good stories have no geographical limitations, which is why we are collaborating internationally with Mammoth Screen, UK, the producers of The Serpent, the hit show on Charles Sobhraj. Dikssha Jyote Routray is creating a limited series based on the sensational 2008 Goa murder case of young UK teenager, Scarlett Keeling with them.”

As for now, the partners can’t stop beaming with pride after Avinash Arun’s Three of Us’ was premiered at IFFI, Goa, in the Indian Panorama section while Varun Grover’s debut feature film All India Rank’ has the honour to be in one of the most prestigious International film festivals.

Sanjay, Dikssha and Sarita continue working to make Matchbox Shots a perfect place for all the directors who have stories to tell the world. Amidst the celebrations, the partners continue working hard to make the production house a perfect home for storytellers. The partners combine strength of 50 years of expertise in entertainment with their skill to pick compelling stories makes Matchbox Shots, premium.