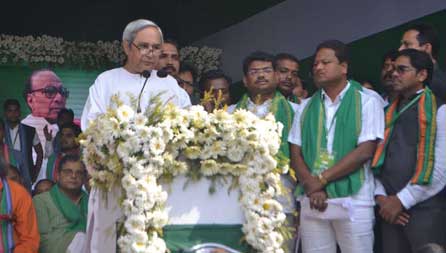 Addressing the party workers on the occasion of BJD’s 18th foundation day, Patnaik said his party would continue to protest against central negligence.

He said while natural calamities are weakening the state’s economy and hurting farmers, the central government has always neglected the state.

The Chief Minister also attacked the opposition and said BJD is not into the business of shedding crocodile tears like the opposition.

He said his government always believes on work not shedding crocodile tears.

With Odisha’s 100th birth anniversary slated to be celebrated in 2036, Patnaik said that preparations to mark the occasion would begin from 2016.

“A vision document- Odisha at 100- will be prepared to ensure holistic development of the state by 2036,” he added.

The chief minister also informed that Biju Patnaik’s 100th birth anniversary would be celebrated next year, and efforts will be made to mark the occasion from village to international level.

“The Chief Minister has already shown several sweet dreams earlier and prepared vision documents. The people of Odisha know how many of them fulfilled. The Chief Minister is a master to hoodwink the people,” said the leader of opposition Narasingh Mishra.