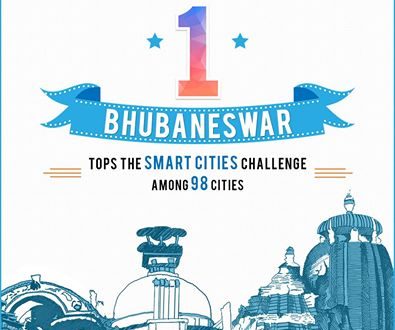 Chief Minister Naveen Patnaik congratulated the people for the achievement and sought support to make it a world-class city.

“Congratulate #bhubaneswar citizens & the team for securing the first position amongst Smart Cities,” he tweeted. “With all your support jointly let’s make #Bhubaneswar a world-class city.”

Bhubaneswar Mayor Anant Narayan Jena said: “We are very happy that Bhubaneswar made it to the top list of the smart city. We will try hard to fulfil the aspirations of people to provide smart services.”

Bhubaneswar scored 78.83 percent, surpassing other contenders to achieve the top slot among 98 cities across the country.

The central government has proposed to investment Rs.50,802 crore in the selected 20 smart cities during a five-year period.