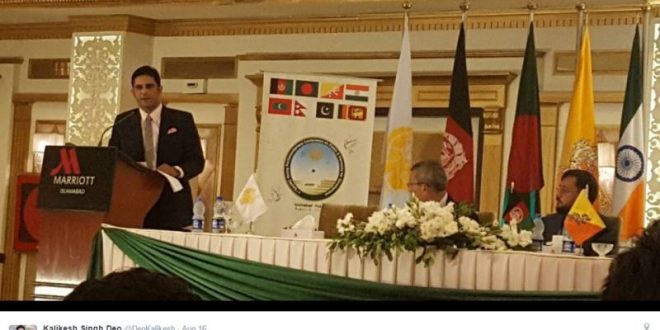 Bhubaneswar: BJD MP Kalikesh Narayan Singhdeo has landed in further trouble as a complaint was filed on Thursday with the Odisha police for insulting the national flag during the Saarc Young Parliamentarians Conference in Pakistan.

Kalikesh had posted a photograph of him while addressing the conference on social media site Twitter. However, it was seen that the Indian tricolour was hoisted upside down.

It was seen that the flag was hoisted with the green at top and saffron down.

“While the national flag was shown upside down, the BJD MP remained silent and spoke on the occasion without bothering to direct the hosts to rectify the mistake,” said Mohapatra.

The BJD MP further went on posting his photograph with the wrongly hoisted national flag on social media, said Mohapatra.

He said the MP has insulted the national flag and hurt his patriotic sentiment.

The complainant, in his petition, has urged the Odisha police to initiate legal action against Singhdeo and other two MPs for insulting the Indian flag.