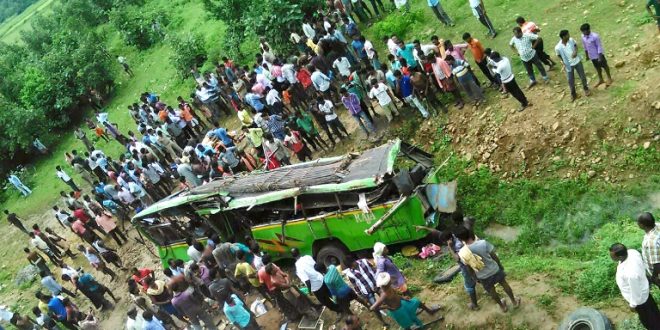 Bhubaneswar: Reckless driving and overloading led to the bus accident in Odisha’s Angul district, which claimed 19 lives and injured around 30 persons on Friday.

According to a report submitted by a 4-member team to the District Collector Anil Samal, the driver was talking on the phone while driving.

The driver lost control on the steering wheel while talking over mobile phone and the unfortunate incident happened, said sources.

The team, led by Athmallik sub-collector and comprising of SDPO, SDMO, and Angul RTO, submitted the report to district Collector after a preliminary investigation.

Chief Minister Naveen Patnaik has asked the district collector to probe the matter.

Sources said the bus owner has all the documents relating to the fitness of the bus Maharaja.

Meanwhile, the police have launched a search operation to nab the bus driver, who fled the spot and went absconding after the mishap.

“We can get the exact reason of the accident after the driver is caught,” said an official.

Demanding adequate compensation to the victims, the Athmallik college students’ union on Saturday observed shutdown in the town.

The students demanded Rs 10 lakh compensation for the family members of each deceased, and arrest of the bus driver.