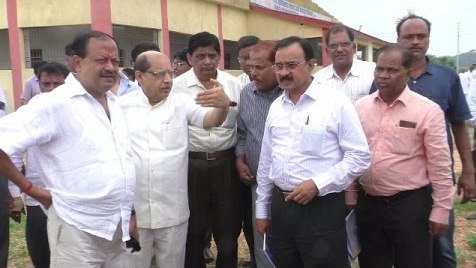 Bhubaneswar: The fact-finding team of BJD, which visited Chhattisgarh last month to make an on-the-spot assessment of the projects being constructed on Mahanadi river, submitted a report to the BJD president and Chief Minister Naveen Patnaik on Sunday.

The team led by Rajya Sabha MP Prasanna Acharya submitted a 25-page report to the Chief Minister, a day before the preparatory meeting on the Mahanadi water dispute.

A tripartite meeting is scheduled to be held in New Delhi on September 17 to resolve the water dispute. It would be attended by the chief ministers of Odisha and Chhattisgarh and Union Minister for Water Resources.

“The construction of barrages and dams by Chhattisgarh will have a severe impact on Odisha. The construction of the projects should be stopped immediately,” Acharya told reporters after submitting the report to Patnaik at Naveen Niwas here.

He said both the centre and Chhattisgarh government have conspired to work against the interest of Odisha.

He also said the Chhattisgarh Water Resources Minister Brij Mohan Agarwal is trying to prolong the dispute with Odisha.

Acharya further said that the Minister is trying to derail the tripartite meeting to be held in New Delhi.

Notably, Agarwal on Friday said BJD is making the issue more political instead of trying to resolve the issue.