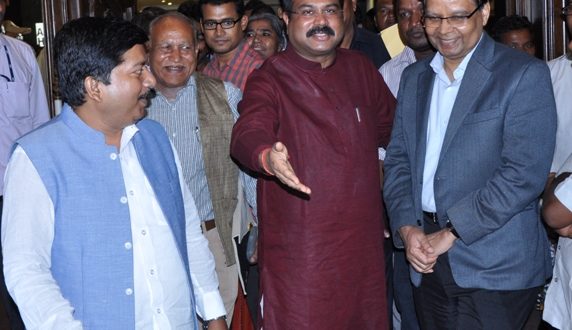 Bhubaneswar: It was an event to discuss the development of Odisha. But, the politicians turned it their battleground as they indulged in ‘tu tu mein mein’.

Union Petroleum Minister Dharmendra Pradhan and Odisha Health Minister Atanu Sabyasachi Nayak entered into a war of words, even though both the leaders shared the same dais at the Odisha Development conclave here on Monday.

Nayak, who first addressed the gathering, asked the Petroleum Minister to rise above narrow political consideration and work for the development of the state.

He raised how the Centre ignored the just demands of the state and decreased shares in different schemes.

In his reply, Pradhan invoked the legendary leader Biju Patnaik and reminded the BJD not to confine him within a party.

“We are proud of Biju Patnaik. But, some are trying to confine the great leader,” said Pradhan.

With the centre-state relationship getting bitter, both BJD and BJP are trying hard to edge out each other by leveling allegations.

However, the tu tu mein mein between the two leaders gave a little humor to the audience.

The event was attended by NITI Ayog vice-chairman Aravind Panagariya. He said India should focus on employment generation and education for the development of the country.