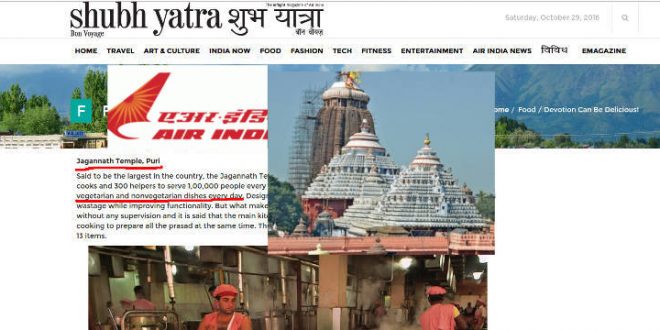 “Said to be the largest in the country, the Jagannath Temple’s kitchen in Puri since its inception has had an army of 500 cooks and 300 helpers to serve 1,00,000 people every day, round the clock – which means almost 285 varieties of vegetarian and nonvegetarian dishes every day,” read the news article published in its October 2016 issue titled ‘Devotion Can Be Delicious‘.

Soon after the goof-up came to light, people in Odisha reacted sharply and criticized the Air India for hurting the religious sentiment of people.

“This is an unfortunate incident. We will raise the issue before concerned authorities,” said Chief Minister Naveen Patnaik in his reaction.

Members of Jagannath Sena staged a demonstration in front of Sri Mandir protesting the report published in the Air India’s magazine.

Subash Mohapatra, the convenor of the National Campaign for Ending Corporate Abuse, lodged a complaint at Singhdwar police station in Puri seeking stringent action against Air India for hurting religious sentiment and belief of people.

“It is a deliberate and malicious act which has hurt me and my faith. It is not only insulted my faith and religion but also the religion, the religious beliefs of all Odias and Jagannath devotees,” said Mohapatra in the FIR.

Meanwhile, Tourism and Culture minister Ashok Chandra Panda said his department would write a letter to the Civil Aviation Ministry seeking an apology from Air India authority for the mistake.

BJP spokesperson Sajjan Sharma criticised Air India for disseminating false information to its passangers and demanded that Air India should remove the magazine and action against the writer. 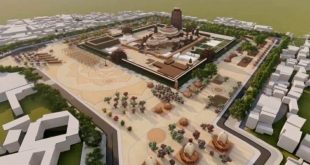 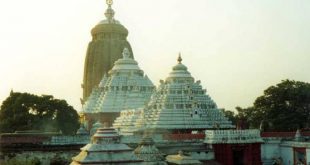 Covid-19 in Odisha: Jagannath Temple to remain shut for devotees