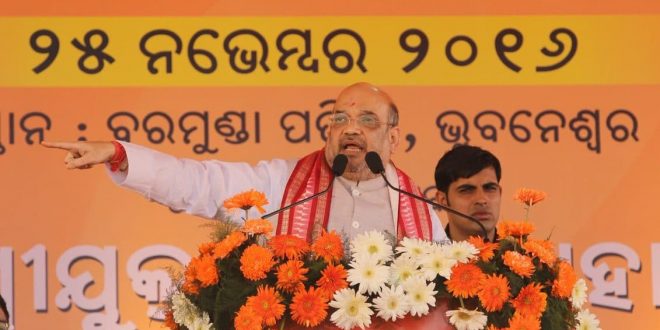 Bhubaneswar: The state BJP on Friday sounded the panchayat polls bugle with BJP national president Amit Shah launching a scathing attack on the BJD government in the state for failing to develop the state and asking people to dethrone the government.

“In Panchayat elections, we will have to show them (opposition) the trailer of the film. We will dethrone the BJD government to usher development of the state,” said Shah addressing a large gathering at ‘Jana Jagaran Maha Samabesh’ held at the Baramunda ground in Bhubaneswar.

Shah said the ruling party has failed to ensure fulfillment of basic needs of the subjects.

“17-year is not a small period. Most of the states of the country have undertaken development in past few years. However, Odisha has remained the same as it was a few years back. What  has Naveen done in past 17 years for the development of Odisha?” asked the BJP president.

He said the Naveen Patnaik government has no right to remain in power for failing to ensure drinking water and electricity to the people in the state.

Giving the instance of Dana Majhi who walked for 10 km carrying his wife’s body on shoulders from the Bhawanipatna hospital due to denial of a hearse van by the authorities, Shah asked the people “Has the government right to rule the state?”

“The BJD government has failed to provide minimum facilities to the people of Odisha. Drinking water facilities are yet to be ensured for all. Besides, youths of Odisha are mostly venturing out of the state to earn a livelihood,” he added.

He said the Chief Minister must explain what he has done for the betterment of people in Odisha.

In the past two and half years, the NDA government at Centre has provided Rs 1.30 lakh crore to Odisha, said Shah alleging, “The BJD government is not letting the benefits of the Central schemes to reach common man of the State.”