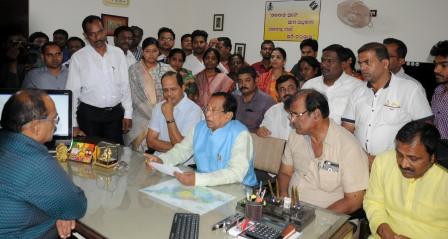 Bhubaneswar: The ruling Biju Janata Dal (BJD) on Thursday moved the Chief Electoral Officer (CEO) against Union Petroleum Minister Dharmendra Pradhan accusing him of threatening petrol pump owners and extracting money from them to use it for the Bijepur by-poll scheduled on February 24.

A delegation of ruling party leaders led by party vice-president and Minister Surya Narayan Patro met CEO Surendra Kumar and submitted a memorandum to him seeking his immediate intervention.

“Dharmendra Pradhan through his top-level officials have been threatening the petrol pump owners and extracting money from them to spend it for the party during the Bijepur by-poll,” Patro told reporters after submitting a memorandum to CEO.

Claiming that the party has the proof to substantiate their allegations against the Union Minister, Patro said one petrol dealer has already filed a complaint with the Bargarh Collector against Pradhan of getting threats from Union Minister Pradhan.

“The BJD has requested the CEO to keep a close watch on the petrol pumps so that such kind of illegal activities can be checked during the by-election,” said Patro.