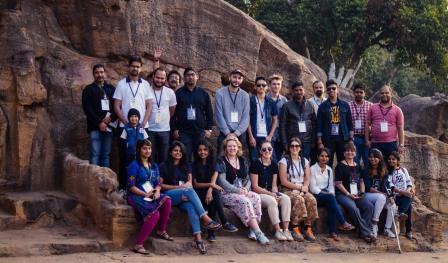 Bhubaneswar: Participants in the 15th Monks, Caves and Kings, heritage walk under the aegis of Ekamra Walks in Udayagiri and Khandagiri were delighted to know three interesting inscriptions at Udayagiri on Saturday.

Today’s guide Satyaswaroop Mishra not only provided an overview of the architecture, sociology, royal patronage and public performances of the caves but also described how the detailed inscription at Hatigumpha remained a difficult task and it took a long time to be understood, even by the experts.

During 1937, a weatherman from the British administration first tried to decipher the Hati Gumpha inscription, however, interestingly could not understand only one word.

However, noted Indian archaeologist BB Lal during 1885 could understand the entire inscription at the biggest cave in Udayagiri as his epigraphical analysis said that Emperor Kharavela was the man behind the development of the caves and other facilities at Udayagiri-Khandagiri.

The first and second line of the Hati Gumpha inscription says “Arya Mahameghavahana Maharaja Shri Kharavela, the overlord of Kalinga, who heightens the glory of the dynasty of Chetaraja, who possesses many auspicious signs, and is gifted with qualities spreading over four quarters, and who has handsome brown complexion, played childhood games for fifteen years.’’

Interestingly, the Manchapuri and Swargapuri Gumpha (caves) say “by the blessings of the Chief Queen of Kharavela, the Chakravarti monarch of Kalinga, the granddaughter of Hathisiha (Hati Simha) and the daughter of Lalaka (Lalarka) caused to be excavated the caves for the Sramanas of Kalinga.”

In simple words, these lines declare that one of the queens of Emperor Kharavela has ordered or sponsored the Manchapuri and Swargapuri Gumpha, which are in a single complex. The inscriptions are also referred as Manchapuri cave inscription I and II.

Jitu Mishra, well-known heritage expert with pan-Indian presence through his Virasaat-E-Hind Foundation, said, “Just towards the left of the inscription inside the Swargapuri Gumpha the images on the wall depict the installation of Kalinga Jina in which Emperor Kharavela and his two queens are seen doing some rituals. However, the image of Kalinga Jina is not clear as many carvings have eroded.’’

Interestingly, the story behind the Bagha Gumpha (Tiger Cave) also attracted the attention of the heritage walkers as the cave is very interesting to look at.

The inscription says ‘the cave of Bhuti, the city judge.’

Describing the sentence, guide Satyaswaroop Mishra said, “This proves that there was a systematic judiciary system during the reign of Emperor Kharavela. The city judge might have donated funds for the cave.”

Neha Joshi and Nidhi Tiwari, both consultants with Ujjwala Programme of the Ministry of Petroleum and Natural, who joined the event were delighted to know the stories and documented history behind the Twin Hills.

Liby Johnson, chief executive officer of well-known social service organisation Gram Vikas also joined the walk and took part in all the discussions with the guide and fellow walkers.

“It is a re-discovery of the city through this heritage walk,’’ he observed.

Prateek Patra, a techie from Infosys also said that the heritage tour through the stony tracks of Udayagiri and Khandagiri was an interesting experience. 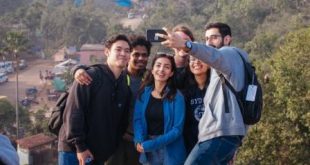 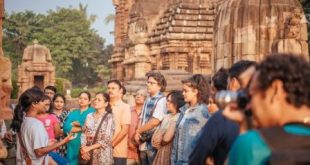