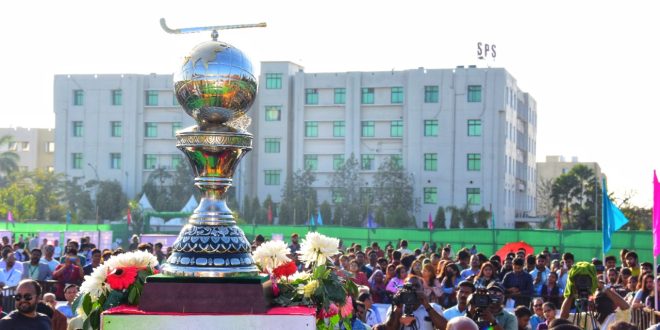 
Bhubaneswar: Hundreds of students of SOA Deemed to be University welcomed the convoy of Men’s Hockey World Cup Trophy with great enthusiasm when it rolled into their campus here with a fusion of dance and songs on Sunday.

The vehicle carrying the World Cup was welcomed with a flurry of fireworks and drumbeats and the trophy was positioned on a nicely decorated podium for more than an hour as students of different institutes under SOA performed presenting a variety of dance and musical numbers.

Earlier in the day, the trophy which was on a nationwide tour, reached the city and was taken to several other venues before being brought to the new SOA stadium where the university’s Vice-Chancellor Prof. Ashok Kumar Mahapatra, senior officials, faculty members and students were present to receive it.

NCC cadets and security personnel presented a guard of honour as the trophy was brought to the podium.

Mr. Panda thanked the SOA students for according an unforgettable welcome to the trophy saying Odisha would be hosting the world championship for the second consecutive occasion.

The minister said Chief Minister Mr. Naveen Patnaik had created a new identity for Odisha by organizing the Men’s Hockey World Cup for the second time in a row which was a matter of pride for the state.

The chief minister’s aim is to make Odisha the country’s sports capital, he said.

He also appealed to the people to extend all possible courtesy to the international players, media persons, officials and supporters of different teams visiting the state during the tournament and ensure that they were comfortable.

The Mayor, Ms. Das also urged the people to ensure that the large number of foreigners who would be Odisha’s guest for the duration of the championship were treated properly and extended all necessary help.

The Vice-Chancellor Prof. Mahapatra expressed his happiness at the trophy being brought to the university campus while hoping that hosts India would play well to win the championship.

The World Cup this time will be held at two locations—the Kalinga Stadium here and the newly built Birsa Munda International Stadium at Rourkela— from January 13 to 29. Sixteen countries would be vying for top honours.
When Odisha hosted the Men’s Hockey World Cup for the first time in 2018 all the matches were played at the Kalinga Stadium in Bhubaneswar.