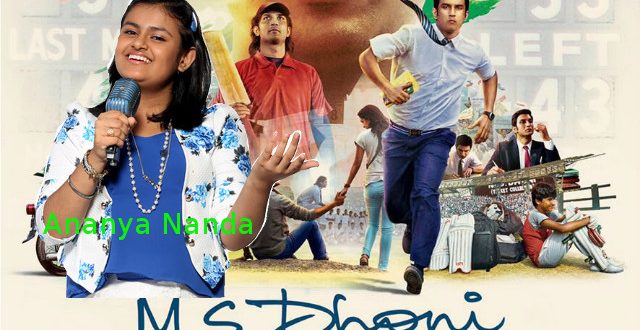 Bhubaneswar: Ananya Nanda of Odisha, who won the Indian Idol Junior 2 title for 2015, has started her career in Bollywood by lending her voice to one of the songs of the most awaited movie of the year “M.S. Dhoni – The Untold Story“.

Ananya, along with Adithyan A Prithviraj, has presented her voice for the song “Padhoge Likhoge” of the movie. Amaal Mallick is the Music Director of the movie. Music is released under T-Series banner.

You can listen to the song at saavn.com and at hungama.com.

The movie starring Sushant Singh Rajput as M.S.Dhoni, Kiara Advani, Disha Patani, Anupam Kher, and Bhumika Chawla is set to be released on September 30. The story focuses on the biography of the famous Indian Cricket team captain Mahendra Singh Dhoni.

Ananya is from Bhubaneswar and studies in Pokhariput DAV Public School. She emerged victorious, beating her contemporary contenders Nahid Afrin and Nithyashree Venkataramanan.