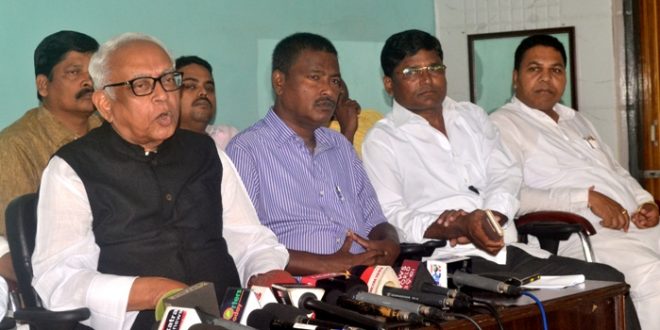 ‘History Will Never Recognize Naveen Patnaik As A Statesman’

Bhubaneswar: Coming down heavily on Chief Minister Naveen Patnaik for his alleged inability to resolve the Mahanadi water dispute, Senior Congress leader and leader of Opposition Narasingh Mishra on Sunday said history would never recognize him either as a leader or as a statesman.

“The Chief Minister has failed miserably to lead the House and the people of Odisha. He may win elections. But, history will never recognize him either as a leader or as a statesman,” said Mishra holding a press conference here.

He also said the Chief Minister has turned out to be a villain.

“I had made an observation against the  Chief Minister on the floor of the House, “He is hero outside but zero inside the House”. I thank the Chief Minister for trying to show his heroism inside the House while intervening  in the debate on the motion relating to Mahanadi water dispute. But, he turned out to be a villain,” said the Leader of Opposition.

He said people of Odisha expected that he should carry the House and try for a united effort to protect the interest of the state and its people.

“Almost all the members who participated  in the debate belonging to Biju Janata Dal, as well as the Opposition, expressed their views for a united effort to prevent the unilateral and illegal act of Chhattisgarh  Government in obstructing the flow of water to Hirakud Dam and downward,” said the senior Congress leader.

But, the Chief Minister ignoring the views of the entire House including his own colleagues could dare to say that he will go alone and fight for the protection of Mahanadi, said Mishra.

He said this speaks of the dictatorial attitude of the  Chief Minister.

“He blames the UPA government and says that they failed to discharge the federal responsibility. In a similar tone, why did not he condemn himself as NDA was in power till 2004 in which he was a party?  He should beg apology for his failure.   Then only people can rely on his present promise,” said the leader of Opposition.